Bernard Cornwell has written over 55 novels and sold more than 20 million books worldwide. 20 million. Just let that sink in.

He’s one of my favourite novelists. I devoured the Sharpe series and am now into his Uhtred Saxon/Dane epic. UK appearances are rare as he lives in America. So I jumped at the chance to see him give a talk in York.

Here are just a few quotes I managed to scribble down.

“You write what you want to read.” In Bernard’s case, he wanted to read Hornblower on land.

“Writing is better than working.”

“Every successful writer begins at the point thinking no one is ever going to read this.”

“Writing a book is not a small thing. You’ve got to overcome the fear. It’s difficult to believe you’re going to get an agent, a publisher, a reader.”

If you’re being rejected, take heart. An agent turned him down with “No one wants to read about the British army.”

I was amazed given the brilliant twists and turns of his books that Bernard is a ‘By the Seat Of Your Pants’ter, rather than an organised plotter.

“I don’t want to write a long outline before I begin. I can’t.”

“I usually throw them into a situation and find out what happens.”

But: “I spend a lot of time putting doors in alleyways.” So if Sharpe gets caught in a situation, the solution appears. But that solution has been hinted at earlier.

“Research is a lifelong thing. It depends on what you’re writing.”

On the Uhtred series: “The body of material is very contained for the Saxon period.”

“Do some research while you’re still writing and the rest you make up.”

“There comes a point where you have to stop researching, and start writing.”

On Sharpe and the TV series

“I had great faith in Sharpe. I thought there was a gap in the market.”

Sharpe was originally meant to be played by Paul McGann. However he injured himself playing football with the cast. Apparently it was the biggest insurance claim in television history.

Sneaky insight: Bernard plans to write another Sharpe book. Also he knows who Sharpe’s father is but won’t divulge. He says “I’ve given you enough clues. Do some reverse engineering.”

“People ask whether writing is lonely. How can it be lonely when you have Sharpe and Harper talking to you?”

The naming of characters

“I couldn’t think of a name for the hero. I’m a huge rugby fan so I temporarily named him after Richard Sharp, adding an ‘e’. It stuck.”

On Uhtred and history

On his Saxon Series based on the adventures of Uhtred of Bebbanburg: “We English don’t know where we came from.”

Sneaky insight: there will probably be three more Uthred books after War Of The Wolf.

Bernard doesn’t relish providing jacket blurb for historical fiction. For fun, he’d rather read a good police procedural. However he does like George MacDonald Fraser, author of the Flashman series.

He’s also not a fan of alternative histories: “I have a certain duty to history. I regard a historical novel as a gateway to history.”

“There’s my little story that goes on in the foreground against the history.”

On The English Civil War

I was delighted when Russell from the Jorvik Viking Centre asked if Bernard would ever write about the English Civil War.

“The Civil War fascinates me but the wrong side won. I’m instinctively a Royalist.”

“In every conflict like that, the Puritans always win. And the reason is they don’t get drunk at night. I prefer Cavaliers.”

I know Bernard says he hates writing jacket blurb, but maybe he’d make an exception for my Royalist spies undermining Oliver Cromwell in the Interregnum?

Graciousness, thy name is Bernard Cornwell 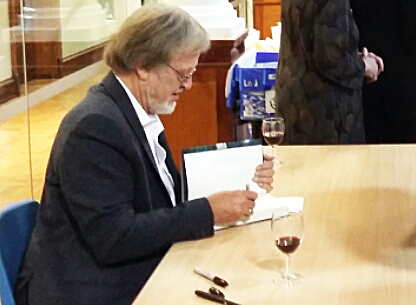 As you would probably guess, Bernard is a natural storyteller. He has a great turn of phrase and is so warm and engaging.

Afterwards he must have signed 200+ copies of books for his adoring fans, including myself. Cape Cod and Charleston are very lucky to have him. If you ever get the chance to hear him speak, go!

P.S. He is a patron of FirstLight Trust, a charity who supports veterans. He’s given permission to call their charity cafe hubs Sharpe’s cafes.